TheTickleRoom – Sophies Audition “I HATE MY FEET BEING TOUCHED”

TheTickleRoom – Sophies Audition “I HATE MY FEET BEING TOUCHED” 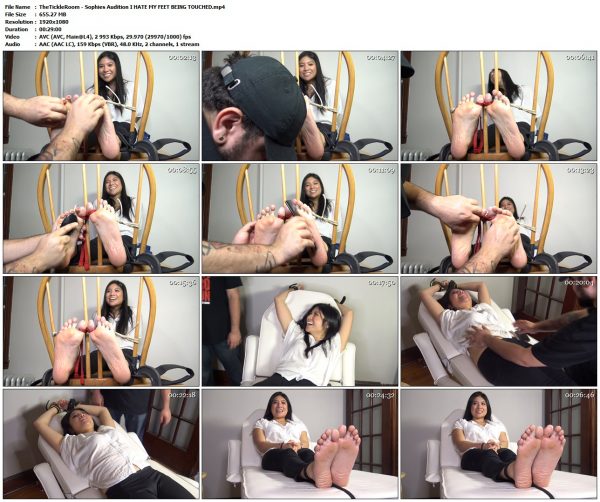 Well hello there my Tickle Room fanatics, we have a new girl today and ANOTHER good friend of mine. I have known Sophie for 2 years now and for 2 WHOLE YEARS I have done everything I can to get her to shoot because of a few reasons. 1. she NEVER shows her feet....like EVER. She is ALWAYS wearing socks but ALWAYS losing her shoes. Literally ALWAYS. The first time we met she got so wasted she actually lost her shoes when she went home (she lived next door lol). 2. We wrestled once and her ass bit me so I tickled her foot and she SPAZZED OUT and later told me she HATED her feet being touched. 3. ALL my friends know what I do and she obviously found out. So when the time came, she told me "I feel like I would NEVER do that".

So I did not pursue anything until....we were outside at a party and she explained a money situation to me. I told her we could shoot? She immediately smiled and laughed saying her feet were way to ugly. So I took one picture and she was barely able to even handle that. She then saw the CRAZY AMOUNT of support by my fans. Then 2 weeks later here we are. She was SUPER NERVOUS and got a pedicure ONE HOUR prior to shooting. Now my tickle fiends realize this girl is a COMPLETE PRUDE. She has NEVER been touched sexually and has never made out with anyone EVER. She has NEVER had a boyfriend or girlfriend. So when she arrives its time.

She is 26 years old and extremely mature for her age. Most people say she seems around 30. But the big thing is she is 5'3 and has size NINE, 9, NUEVE FEET!!!! This is why I would always wonder because her sister called her a hobbit. So now we are really gonna test her. I will say one thing. This was an experience for both of us. At first I really did not think she was ticklish. But then the occasional BURST of a giggle and her REALLY pulling away. She even says in the video she is TRULY feeling it and just does not really know to react and the laugh feels so crazy to her. She keeps her eyes closed and I honestly thought she did not care and it did nothing to her until after. She was REALLY messed up. She was sitting STARING at the wall for like 10 minutes until I tied her up for her upperbody. This is where the OVERLOAD happened. She could NOT take this. At one point in the video you actually see her say "Matt I can't do it I can't". She was really thinking of stopping there since she was laughing SO much harder and could not hold it in as easy. But she mustered up the strength to continue! Watch her hold it in then EXHALE. You can tell she is NOT used to this AT ALL. After she was literally shocked she did it. She sat there for 20 minutes just telling me OVER AND OVER how she could not believe she did it. She even admitted to liking it but she felt wrong because her whole life she hated her feet being touched.